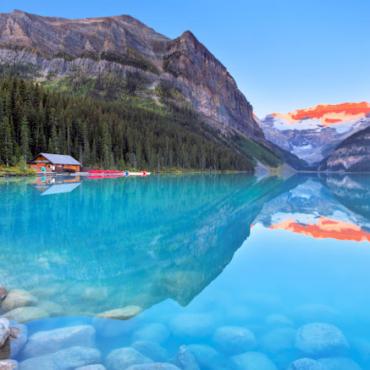 In 1883, the transcontinental railway reached the formidable Rocky Mountains and three railway workers chanced upon some simmering hot springs. The government immediately protected the area and two years later it became Canada's first national park, Banff National Park.  Since then holidays to Banff have become as popular with international visitors as they have with Canadians.


Banff is the largest town in the park and is also the first incorporated municipality located within a national park in Canada. Surrounded by mountains, notably Mount Rundle, Sulphur Mountain, Mount Norquay and Cascade Mountain, Banff has the highest elevation in Canada. 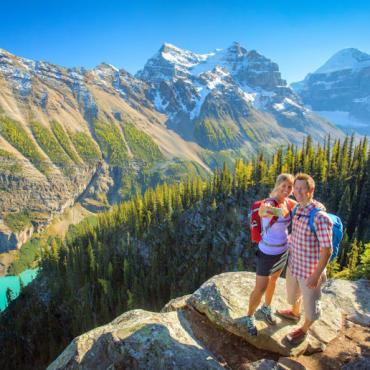 On Banff's bustling Main Avenue, virtually every language from German and Japanese to French and Spanish can be heard. Yet only minutes away from all the action, a quiet walk along the banks of the Bow River reminds you that the town is located inside Canada's premier national park spanning 2,564 square miles of valleys, mountains, glaciers, forests, meadows and rivers.

Explore the great outdoors of Western Canada. Discover the heart of the Canadian Rockies on this Alberta and British Columbia motorhome tour.

The glaciers, national parks and laid-back cities of western Canada are just some of the highlights from Calgary to Lake Louise, Waterton, Jasper and Banff.

Beautiful Vancouver is the starting point for this two-week circular tour that showcases the national parks of the Canadian Rockies.

Experience the Best of the West on this magnificent journey through the worlds most photographed landmarks-the National Parks of the Canadian Rockies.

THE escorted tour holiday of a lifetime!

A classic route, featuring breathtaking scenery in the provinces of British Columbia and Alberta. From Vancouver, Okanagan Valley and Glacier National Park to the regions of Banff and Jasper.

A spectacular adventure packed with world-class resorts and a mosaic of landscapes awaits you as you travel from towering mountains to rugged coastlines.

From the wildly western city of Calgary you will travel in the footsteps of dinosaurs across the ancient rockscape of Drumheller.

A journey that will capture the imagination, combine the romance of train travel with the delights of cruising the fabled Inside Passage.

A Canadian Adventure (without a car)

Canada’s most cosmopolitan city and one of the great natural wonders of the world are combined in the first four nights of this Canadian discovery holiday. Explore Toronto’s diversity on a comprehensive city tour.

Best of the Canadian Rockies - A Tauck Escorted Tour

Cosmopolitan Vancouver is the starting point for this 18-day circular tour that showcases the national parks and lakes of the spectacular Canadian Rockies.

Welcome to Western Canada. Simply one of the best places in North America to explore the great outdoors and nature's wonders.

Alberta, where the sun shines for 17 hours each summer day, the mountains tickle the clouds and the northern lights dance in the endless sky.

This three-week motorhome adventure takes in some of the most magnificent national parks in North America. From Canada's Jasper and Banff to America's mighty Yellowstone, Grand Teton and Glacier National Parks. This adventures delivers a scenery...

This holiday explores the mountains, forests and waters that make the provinces of British Columbia and Alberta a world-renowned place of natural beauty.

This rail adventure, a combination of two Rocky Mountaineer routes, fuses the sigh-triggering sights of the Canadian Rockies with quality time in Jasper, Banff and Lake Louise.

Our 21-night Western Canada adventure, along the Sea to Sky Highway, kicks off in the beautiful city of Vancouver and finishes in Calgary with nothing but stunning scenery in between.

Rocky Mountaineer - First Passage to the West Rail Only

The most popular of the Rocky Mountaineer routes, and the only passenger rail service on the historic Canadian Pacific track - famous for connecting British Columbia to Canada over 125 years ago.

Journey Through The Clouds 'At Leisure - Escorted Rail Tour'

This escorted rail tour is leisurely paced over twelve days and includes two days aboard the Rocky Mountaineer, one of the world's most iconic trains.

Simply THE best way to experience the natural wonders of Alaska and Canada.

The 'Castle in the Rockies' has a reputation for legendary hospitality and it doesn't disappoint.

An oasis of calm and tranquility in Banff National Park. This lodge has beautifully appointed rooms and cabins with spectacular views of the Moraine Lake or Valley of The Tea Peaks.

Set in Banff National Park and dating back to 1922, this Lodge has 16 historic cabins in the grounds all with cosy wood-burning fireplaces. Here you'll feel at one with nature!

Legendary, luxurious property perched on the edge of one of the world's most photographed lakes, Lake Louise, 30 minute drive from Banff.

This award-winning wellness resort and mountain retreat lies near the pretty town of Canmore, and just a 20 minute drive to Banff.