Calgary is a dynamic city nestled in the rolling foothills of Canada's Rocky Mountains. Every July, "Stampede Fever" hits the city, as the world famous Calgary Stampede draws thousands of people to the 10-day rodeo and western celebration. 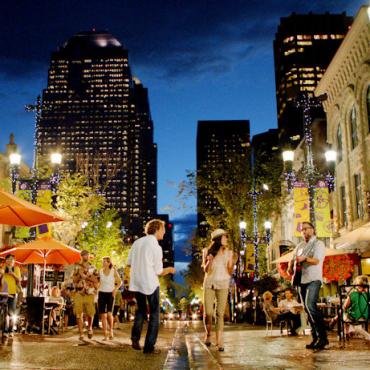 Calgary's urban scene has changed considerably since the beginning of the city's rapid growth. It is also starting to become recognised as one of Canada's most diverse cities, but still retains much of its traditional culture of hotel saloons, western bars, night clubs, football and hockey. Following its revival in the 1990s, Calgary has also become a centre for country music in Canada. As referred to by some as the "Nashville of the North."

As a relatively ethnically diverse city, Calgary also has a number of multicultural areas and assets. It has one of the largest Chinatowns in Canada, as well as, a “Little Italy” in the Bridgeland neighbourhood.

A spectacular adventure packed with world-class resorts and a mosaic of landscapes awaits you as you travel from towering mountains to rugged coastlines.

From the wildly western city of Calgary you will travel in the footsteps of dinosaurs across the ancient rockscape of Drumheller.

A Canadian Adventure (without a car)

Canada’s most cosmopolitan city and one of the great natural wonders of the world are combined in the first four nights of this Canadian discovery holiday. Explore Toronto’s diversity on a comprehensive city tour.

Explore the great outdoors of Western Canada. Discover the heart of the Canadian Rockies on this Alberta and British Columbia motorhome tour.

Alberta, where the sun shines for 17 hours each summer day, the mountains tickle the clouds and the northern lights dance in the endless sky.

This three-week motorhome adventure takes in some of the most magnificent national parks in North America. From Canada's Jasper and Banff to America's mighty Yellowstone, Grand Teton and Glacier National Parks. This adventures delivers a scenery...

This holiday explores the mountains, forests and waters that make the provinces of British Columbia and Alberta a world-renowned place of natural beauty.

Journey Through The Clouds 'At Leisure - Escorted Rail Tour'

This escorted rail tour is leisurely paced over twelve days and includes two days aboard the Rocky Mountaineer, one of the world's most iconic trains.

Fab, fun, funky and situated in the heart of downtown Calgary.

This historic landmark hotel, located in the heart of Calgary, offers a classic style, excellent service and a luxury accommodation options.