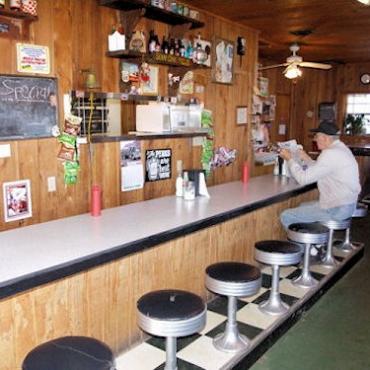 After a savage fire this beloved Route 66 landmark, in Stroud, re-opened and is still serving the famed Alligator Burger, a highly regarded reuben sandwich, and a delicious German dish, Jagerschnitzel.

Over the years, the Rock Cafe has served many celebrities, including Led Zeppelin front man Robert Plant, "Simpsons" creator Matt Groening and former "Today" host Bryant Gumbel. Dawn Welch has owned the Rock Cafe on Route 66 since 1993, and she was the inspiration for the Sally Carrera character in the 2006 animated Pixar film "Cars."

It's a fun stop whilst travelling on your Route 66 fly-drive holiday. Don't forget to add your graffiti to the bathrooms walls! It's encouraged!